Play games using Tornado Gloves Controller. It is very comfortable, you can move around the room or lie on the couch. Especially, the gloves advantage appears when using the 3D glasses and helmets. Since, in this case, a classic keyboard is not visible, Tornado gloves can help you and they will be in your hands.

The Tornado will make you feel like real pilots, drivers and navigators, and due to it, the line between real and virtual controls dissolves. As an example, we’ve recorded several real games battles of this genre – World of Warplanes, World of Tanks, War Thunder.

We are proud of Tornado Gloves Controller, because it allows to defeat entire enemy groups even with a low “pumped-up” military vehicles. Please, look at the example of one of the best games in this genre – World of Warplanes!

It is also possible to drive the game World of Tanks, you need to enable the Tornado control mode “Mouse Mode” for this.

You can see that the player gets free from the keyboard and mouse, and the player’s hands and fingers seem to interact with real levers, rudders, hand wheels, buttons and switches. While playing with Tornado, the player will feel the happiness of physical activity and the convenience of playing the game. The player will receive positive emotions and adrenaline.

Global DJ Technology recognizes and supports the desire of our clients to get the exclusive version of Tornado Gloves Controller. For Wargaming games, the gloves can look like this: 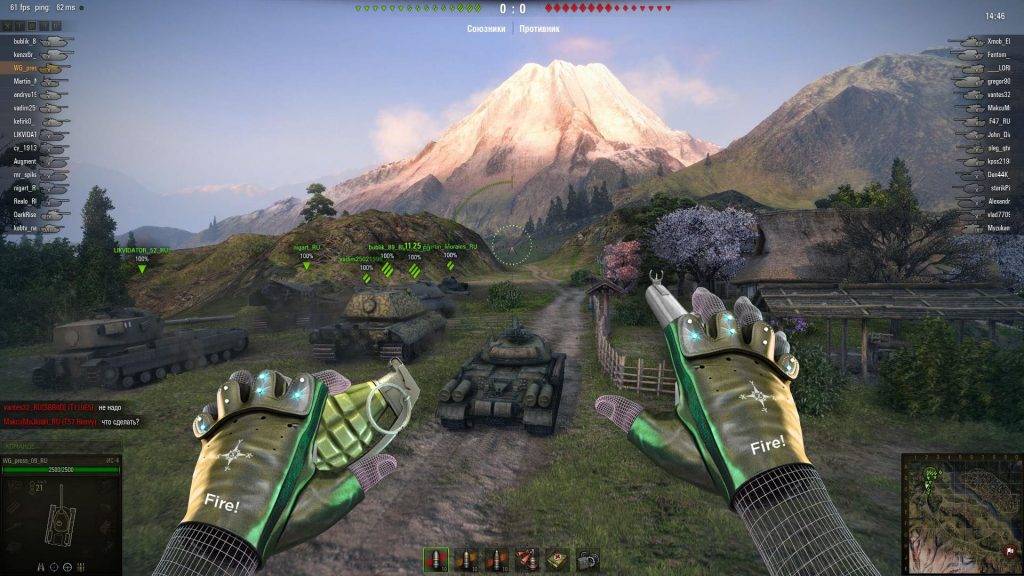 This game has become the favorite one for children at 5-16 years at all gaming shows with our participation. Within a few minutes, children with great pleasure handled all the fine points of control and immediately became aware of the controller advantages. After playing five minutes they brought their friends and passed them their experience and emotions.

Extremes, thrill fans! Attention! We present you the helicopter driving using Tornado in a helicopter simulator. Piloting with the help of levers reminds balancing on the tip of a needle, our controller will help you to feel these emotions.

For convenience, each user can customize the controller for his or her convenient gestures and movements, assign functions for buttons and axes. A file with all the settings of the Tornado driver/plugin is called a preset. For any game, a player can create his or her own convenient preset. 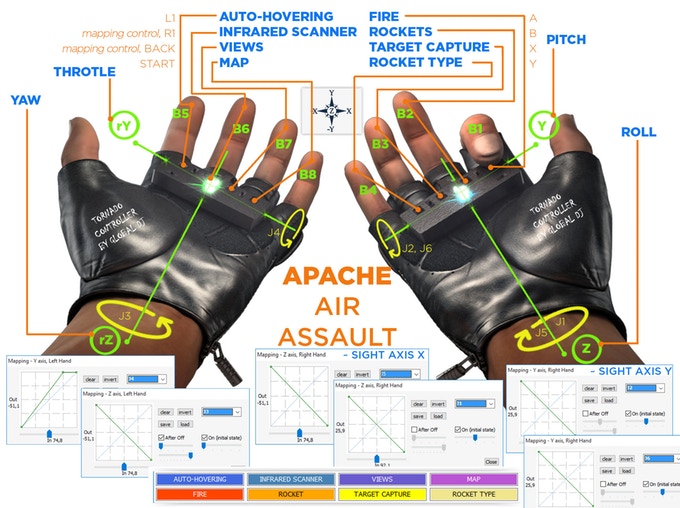 At the moment we have developed a large number of presets and optimized them for different genres of games.

At the beginning of each video, we show a graphical representation of the preset for the proper game.

The lower part of the image shows the graphic mappings – the functions of the input and output values of the controller Y = F (X). X – input values of the controller is for the corresponding axis, and Y – is output values that are transmitted to the game. For each axis, you can draw several different functions (maps). Therefore, with one gesture you can control several different parameters or axes in the game.

The games of the genre “fighting game” will be presented on the example of one of the most successful and influential video game in the history – Mortal Kombat XL for 1 and 2 players.

Values and Advantages Tornado for this genre:

* each set can contain up to 4 gloves.

In the following videos, the example of the cult game Battlefield 1, let’s pay attention to the simplicity and naturalness of managing characters, weapons, tanks, planes with the help of Tornado Gloves Controller:

Playing new or already familiar games of this genre, you will immediately notice the advantages and values of our Tornado Gloves Controller, you will receive a completely new drive and emotions every time:

In the next subsection, we show how the Tornado Gloves Controller demonstrates its unique capabilities in games of genres such as Arcade and Sports Simulators: Need For Speed, Grid 2, and Vehicular Combat Racing Video Games: Road Redemption and many others…

The Tornado allows you to sit in your favorite chair freely and comfortably, wear a VR headset or sit away from the TV or monitor, take a comfortable position, relax, imagine yourself driving a super “pumped-up” car, motorcycle or other vehicle – and get pleasure from driving, polish driving skills.

A vivid example of this genre is the game “Star Conflict”.

The Tornado Gloves Controller gives the best fit for controlling a spacecraft.

Tornado is a gadget from the future and it is already available right now!