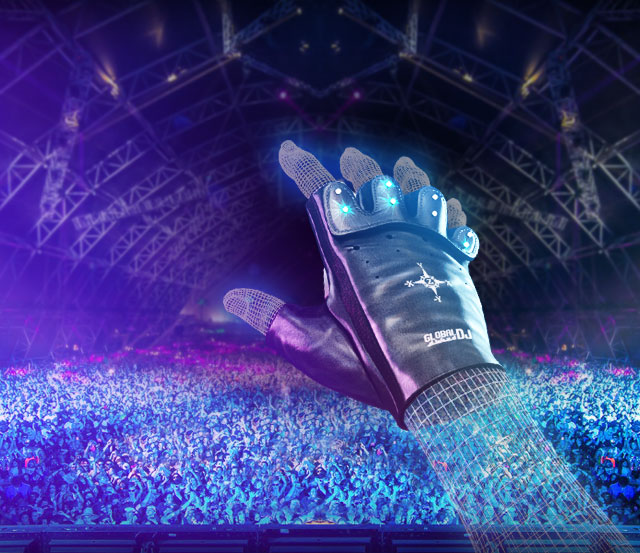 
Make music like no other!
Create effects while dancing!
Crank up the party with hand motions!
Your music will never feel the same again. 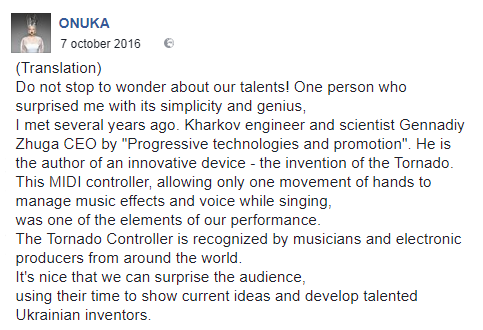 Tornado is a Wireless MIDI controller that gives you a possibility to demonstrate incredible musical effects without touching the equipment during Live Shows. Tornado Gloves are developed specifically for creation of vivid, unforgettable Live Shows. New MIDI Controller allows you to create sound effects using gestures visually and effectively for the audience. It is very easy to perform with Tornado gloves. 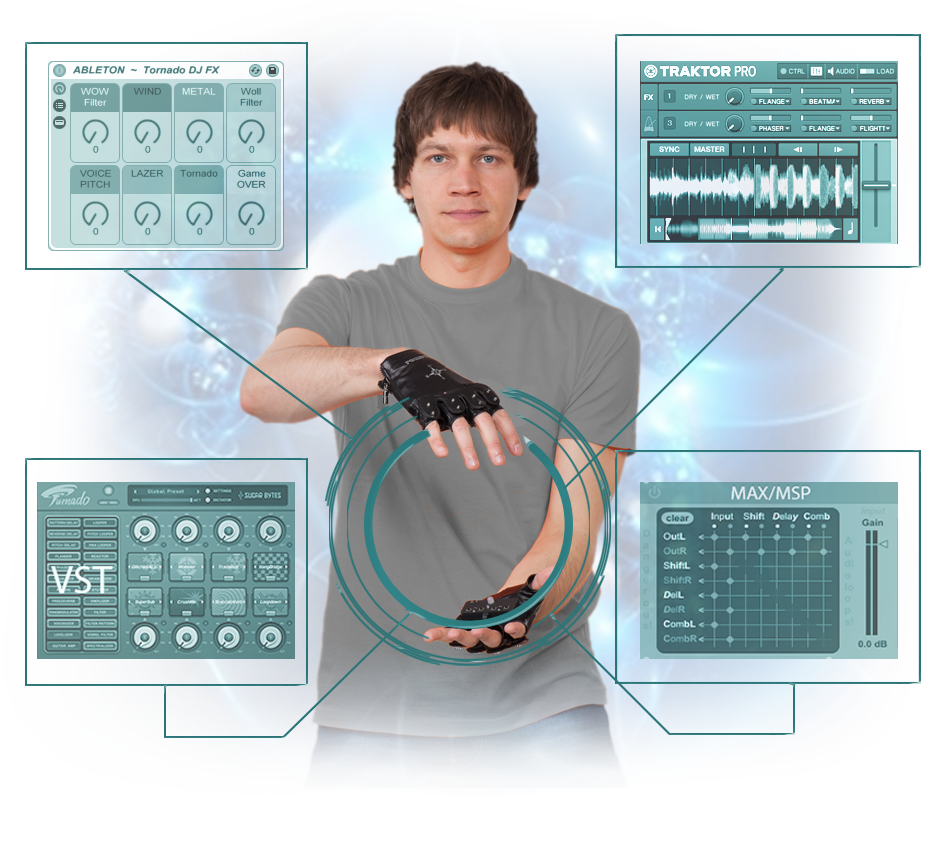 You will not be tied to the DJ console: instead of reaching out and turning the fader knob, simply raise your hand. Move freely around the stage. Remove the barrier between you, DJ deck and the party: Tornado is more like a musical instrument that fits in your hands and can be accessed any time.

Tornado consists of 3D Virtual Manipulator which is represented as Gloves and it also has the multifunctional MIDI keyboard, LED Visual Feedback and USB adapter which ensures good radio contact. Gestures are captured by 3D-sensors: Accelerometer, Gyroscope, Compass. Due to such selection of sensors you get 9D degrees of freedom.

The following is captured:

3D-sensors are made on both gloves, that’s why you will be able to create several musical effects simultaneously or to control several parameters of one effect using two hands.

The gloves are made of quality perforated leather. 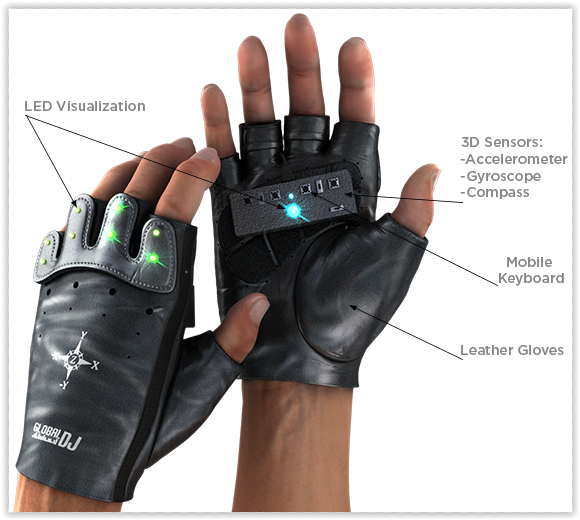 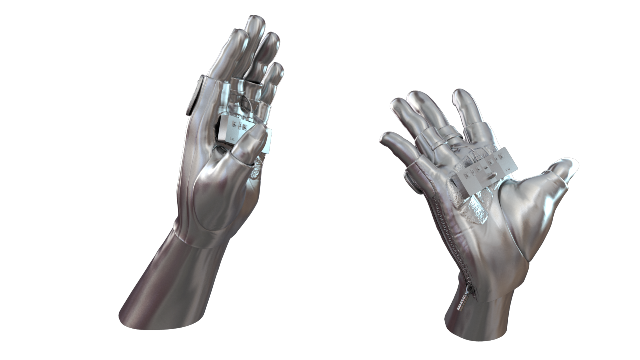 Own radio interface: during the show you can easily turn off Wi-Fi and Bluetooth on the laptop and decrease the CPU load.

Interference immunity: Operation of the gloves doesn’t depend on the level of hand illumination intensity, light show and projectors intensity, DJ’s clothing colour.

Tornado gloves have a multifunctional keyboard on both palms. Handy buttons are located directly under each finger. The keyboard is meant for quick sending of commands without unnecessary motions and gestures.

You don’t have to turn on an effect using a gesture! An effect can be activated by a button and controlled by a gesture. Besides, you can play the synthesizer directly using gloves’ keyboard.

Up to 30 commands can be sent by pressing only one button.These can be various MIDI messages for digital audio workstation control as well as commands for control of glove operation algorithms.

All buttons can be programmed and connected to certain parameters of musical effects and synthesizers (Mapping).

The LED lights are activated automatically and respond to every gesture.

The LEDs on both hands act independently. They can be adjusted to various modes of operation.

Besides, LED visualization is an element of decoration. 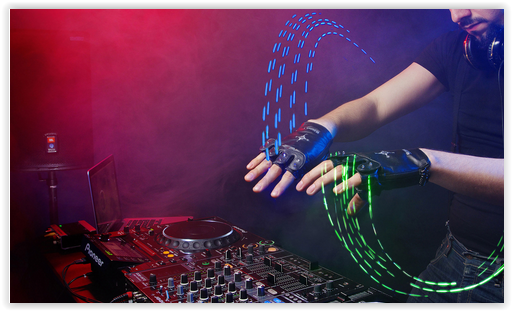 Application of the Tornado

Tornado MIDI Gloves are ideal for creating impressive shows in clubs and festivals:

High reliability of controller operation is ensured by protection against generation of false command signals and by a “smart” filter, which prevents fluctuations of musical sounds and controls admissible limits of sensor signals.

Automatic knob return and automatic effect turn off functions are built in the Tornado software. 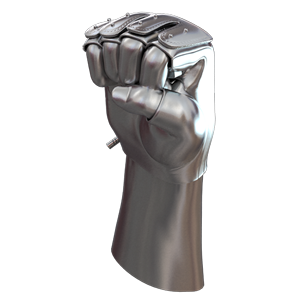 A laptop (Windows or Mac OSX) and audio interface are required for Tornado Gloves operation. Ways of connection:

No complicated programming! You don’t need to create MIDI mapping – we’ve already done everything for you. The Tornado plugin is implemented using presets. You just need to download the selected preset from our website and everything will be ready to create musical effects. You will instantly start mastering musical effects. It’s very easy!

All effects in presets are controlled by simple and convenient gestures. On the one hand, these are the favorite moves of DJs, on the other, they are visually obvious and understandable to people on the dance floor. 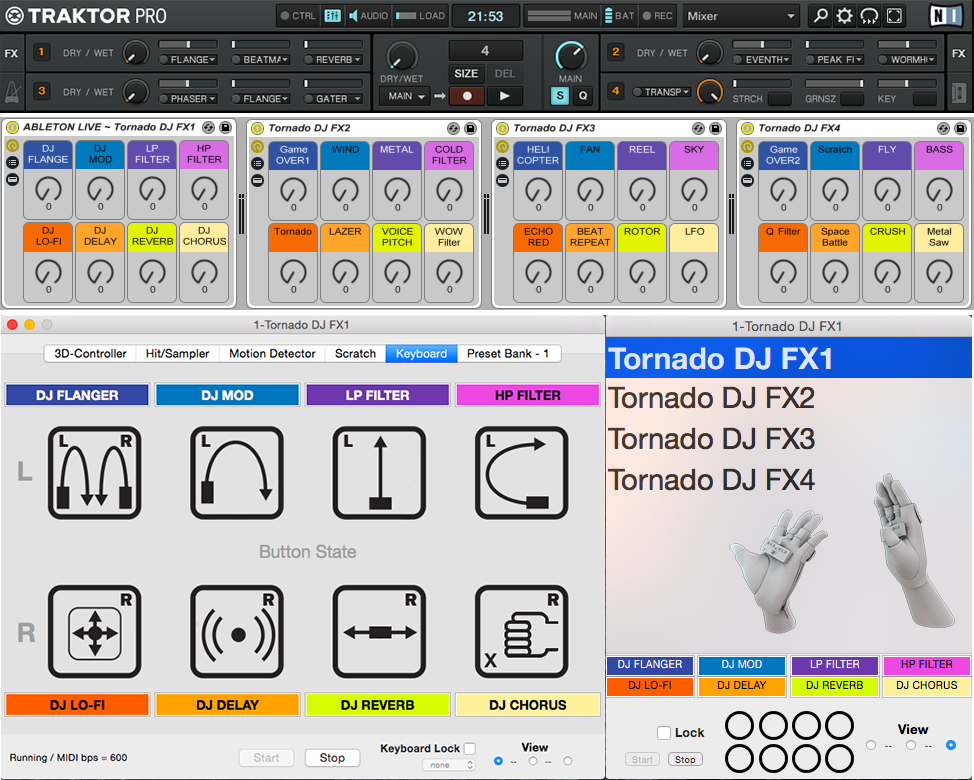 We developed presets for such popular DJ programs as Ableton Live and Traktor Pro. Presets involve both classical DJ and new effects. Now you can control your favourite effects by means of gestures, mix the tracks in a new way, do scrath, launch samples by means of waves of the hands, synthesize Uplifting and Downlifting effects during live shows. 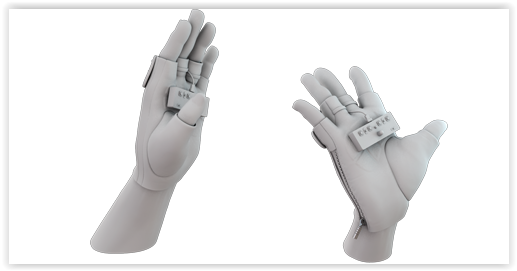 Using Tornado, you can control your voice, apply effects to it (pitch, delay, echo, reverb, chorus, etc.) directly during the show. It is very comfortable, ergonomic and natural. Gloves will become your indispensable tool for opening up new opportunities in your vocal performance. 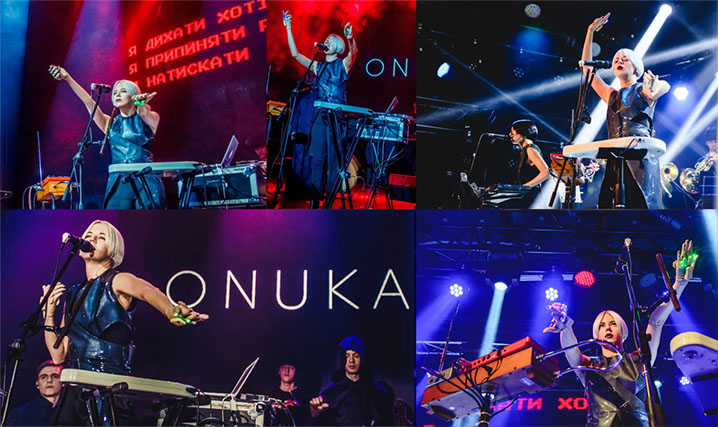 Club front men use the MIDI gloves in a very eye-catching way. Tornado helps them to entertain the audience, play and interact with it, create positive emotions for people.

Develop your extraordinary musical effects and control them by MIDI gloves.
Tornado software allows you to connect any effect parameter to the appropriate motion using advanced MIDI Mapping.

Tornado allows you to control several effects simultaneously in different trajectories and MIDI maps by one gesture or one hand motion. The trajectory (MIDI map) is drawn with a graphical editor, and the multicontroller links the individual MIDI map to the corresponding parameter. 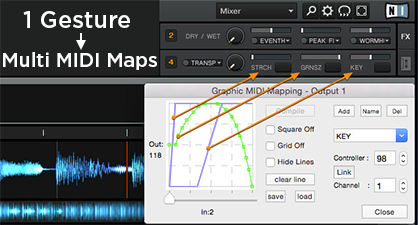 Tornado MIDI controller can manage all VST plug-ins, which support the MIDI interface. Such potential can be implemented by creating original musical ideas during the live show. It is an exciting process making your performance unique.

In this mode the MIDI gloves allow creating complex, dynamically developing musical effects by simple and spectacular way. It is attained by sequence distribution of musical effects into scenarios. These scenarios are easy to memorize and easy to execute.

Besides, using Tornado you can create a unique “Live” track just during the show in the “Scenario” mode. Track sounding and development depends on the DJ’s current emotional state and inspiration. The artist can change the music pattern of the track at any time feeling the audience’s mood.

Tornado controller has additional modes of operation. It can operate as a 3D mouse or a joystick. You can play games moving around the room, and LED visualization will display important game effects.

You can control the light show, which supports the DMX technology, by motions of the Tornado gloves. Bring in a story of your music to the light show. It can be done by means of plug-ins, which transform MIDI signals to DMX signals.

Tornado Gloves are very effective for creating visual live performances. At any moment the VJ can easily manage visual objects and the 3D mapping process. Simultaneously performers get the ability to move around the stage or interact with the audience. VJ turns into the wizard, who creates his colorful virtual world with gestures.

Tornado Gloves are compatible with such software for VJing, as: Resolume, TouchDesigner, MadMapper, VDMX, MAX/MSP and many others. Using this software together with Tornado Gloves performers obtain the ability to control visualization, footages, loops on large screens and projections. It is particularly interesting to use Tornado Gloves with projection domes from Front Pictures, as shown in the following video.

With the help of Tornado MIDI Controller you can literally draw your emotions and feelings, shape them in the form of a colorful picture. 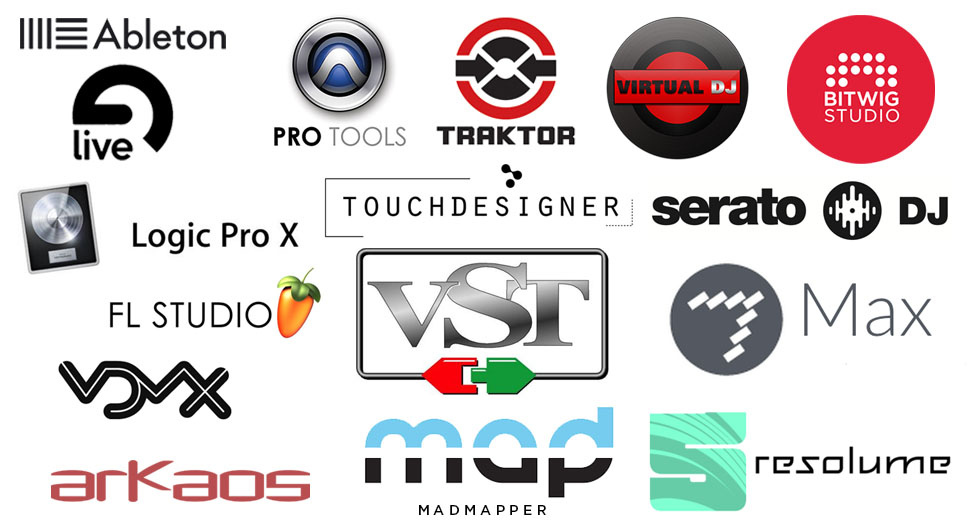